Reaction of animal welfare CSOs on a case of unprofessional journalism 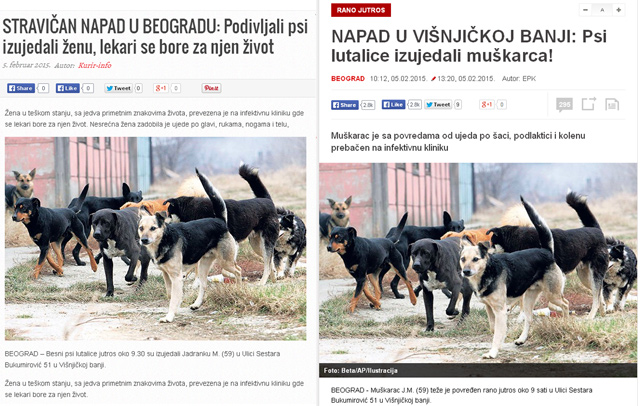 In occasion of the false and unprofessional reporting on an attack of a dog on a man, while he was walking his pet, the societies Hope for Animals – Riska, Link Plus and Feniks have sent a report to the president of Journalist Society of Serbia Ljiljana Smajlović, and the president of the Independent Journalist Society of Serbia, Vukašin Obradović:

„We address you because on February 5th 2015. in the online edition of Kurir newspaper, a news was published and titled „Horrific attack in Belgrade: madding dogs mauled a woman, doctors are struggling for her life!“. „Rabid stray dogs have bitten Jadranka M. (59 y.o.) in Sestara Bukumirović street in Višnjička banja, around 9:30 AM. The woman is critical, vital signs barely detectable, and she was taken to the Clinic for Infectious Diseases, where doctors are struggling for her life. The unfortunate woman was bitten on her head, legs, arms and body, and it is unknown if the dogs are diseased.“

The copied text contains false information, which have been subsequently changed in the online edition - by the afternoon, the title became: „Attack in Višnjička Banja: stray dogs bite a man“.

The edited text contains „new“ information: quotes form the director of the Clinic dr Mijomir Pelemiš, who confirmed that the injuries that the patient sustained are not threatening and that the necessary medical help has been provided.

How dangerous this type of reporting is, threatening to become an all-present trend in journalism, is noticeable from the reporting of other media companies on the same incident:

„Telegraf“ online (Feb 5th 2015, 11:19AM) published a news titled „Dog pack bites a man, a man's life threatened“, and the only correct information in there is the gender of the person.

„Novosti“ online (Feb 5th 2015.) also published a news about a mauled woman struggling for her life.

„Alo“ online (Feb 5th 2015.) gets the gender of the person correct, but not the information on his state and injuries.

All those news had bombastic titles:

All the media companies have modified the original news during the same day.

We consider that by unchecked, false and sensational reporting on a sensitive and important social subject, as the abandoned animals problem is, not only the journalist ethics is breached, but also the Public Information and Media Law (Sl.glasnik RS br. 83/2014), art. 5, and art 9. It is especially worrying that many media companies have had this way of reporting.

This type of journalism asks a question about the true role of the media, and their social responsibility. We condemn the irresponsible and unthoughtful actions of journalists and editors, because these kind of false information misinform the public, and stimulates a mood that doesn't support the solution of the abandoned animals problem, or the safety of the citizens

On the contrary, stirring strong emotions in the public, by stimulating prejudice and wrong attitudes, produces the kind of behavior and an atmosphere in which the problem is not only maintained, but made worse.

We also mention that the media companies still use an outdated and wrong term – „a stray dog“ instead of „an abandoned dog“. Also, please notice the overall terminology used: „horror“, „horrific“, „rabid“.

In accordance with everything stated above, we plead that journalist societies react by condemning this sort of practice, and prevent further misuse of media“.