World Day for Animals in Laboratories 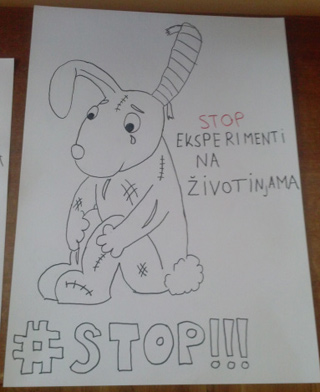 In occasion of World Day for Animals in Laboratories, together with our colleges from societies Link Plus and Hope for Animals – Riska, we would like to remind the public that about 150 million animals are sacrificed in cruel experiments.

Today, there are alternatives that can replace most of the laboratory animals, but still there is a huge number of experiments being conducted on fish, amphibians, reptiles, birds and mammals. Half of all the laboratory mammals are mice and rats, and the other half constitutes of rabbits, guinea pigs, dogs, cats, monkeys, horses, pigs, and other animals.

On the World Day for Animals in Laboratories, we would like to remind that a year ago we have submitted a charge against Military Medical Academy, because we discovered that eight “used up” dogs of Serbian Military would be sacrificed for an experiment which has no legal or scientific justification. After the harsh reaction of the public, the former Minister of Defense had announced that the experiment on dogs had been banned.

The public got calm, but we continued to insist to adopt those eight dogs – six German shepherds, a Labrador, and a Belgian Malinois. After we were informed that the “used-up”[1] dogs are for sale, we offered to buy them out, but we got the answer that dogs are transferred to city of Niš, to a guide dogs training troop. In the meantime, we have contacted the Republic Veterinary Inspection to the point we got the answer that it was determined that the experiment on the dogs hadn’t been started at all. We have also addressed the Minister of Agriculture and Environmental protection, Ethical Council for Laboratory Animals Welfare and the Serbian Academy of Science and Arts, the latter being the initiator of the experiment.

In the end, the Ministry of Defense that dogs weren’t at all “used-up”, that is that they hadn’t been declared unsuitable, that they are still in the service of Serbian Military, and that no employee would be accounted for not obeying even the internal Material Management Rule Book.

We remind that, according to existing law, experiment cannot be executed on animals that are not specifically bred for that purpose.

EU and Israel forbid many of experiments on animals, and as of March 11th of 2013. a ban is in power on trade and import of cosmetic and personal hygiene products and their ingredients which have been tested on animals anywhere in the world.

Worldwide, World Day for Animals in Laboratories has been marked since 1979, by protests, conferences and different public events, with a goal of raising awareness of the suffering of laboratory animals.

This year “Feniks”, as a part of our long-running campaign Clean, Pretty and Cruelty-Free, has hosted a workshop on the subject of “Senseless experiments on animals”, for the students of 6th and 7th grade of “Sveti Sava” primary school. Our goal was to awaken the students to the existence of animals on which experiments are conducted, to inform about why and how are these experiments being conducted, to stimulate critical thinking and development of empathy, and to inform them on choice – the alternatives. As an introduction, we showed the film “The failure of animal experiments”, produced by German society “Doctors Against Experiments on Animals”, and for which our associates made subtitles in Serbian. The film had an excellent reception.

The workshop consisted of 15 students. After having a discussion about the film, the students formed several groups, with an assignment to draw a flyer with a message. From their works, it is evident that they understood the subject, because they have sent a clear message against experiments on animals. This is a great support of our work, and of the way which we chose to educate the youngest. In the evaluation, the students gave high marks and positive comments, which mirrors their interests on the topic which we managed to induce, and the positive atmosphere which was constant during the workshop.

[1] The original experiment documentation described dogs with the term “rashodovani”, which can be translated as “used-up”, or “spent”. The term is characteristically used for objects, not living creatures.