Announcement of Belgrade Marathon and societies for protection of animals 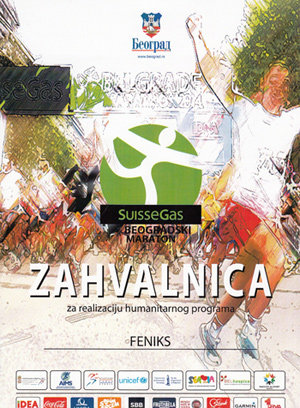 Society “Feniks” has received, together with five other societies, an acknowledgment from the organizers of Belgrade Marathon for realization of humane program - the Responsible Dog Owners Walk 28th SuisseGas Belgrade Marathon (on April 18th). We are glad that the organizers have recognized the importance of involving CSOs in resolving issues in the local community.

Starting this year, the Belgrade Marathon became a pet friendly event, enabling dog owners to run Pleasure Race together with their dogs. Responsible owners who brought their vaccinated and microchipped dogs have for the first time walked off the sidewalk and walked with their dogs in the very streets of Belgrade.

A condition for participation in the race was for the dogs to be chipped and vaccinated against rabies, to be led on a leash, to wear a muzzle if they are in the dog category that is obliged to that by law, and for the owners to bring along hygienic bags and water for the dogs.

On the day of the Marathon, it rained constantly, but nevertheless a group of about 30 animal lovers and 11 dogs gathered in front of the City Parliament – dog owners from Belgrade and Pančevo, friends of animals, societies “Link plus”, “Feniks (Phoenix)”, “Hope For Animals – Riska”, “Zoovita”, “Ljubimci (Pets)” i “Ekolibrijum”. The citizens who came to support marathon runners were coming to say hello to the dogs, and some of them came on purpose to support dog participation in the marathon.

Responsible Dog Owners Walk has a goal of promoting responsible and humane relationship with animals, and also helping abandoned pets. Besides the walk, donating food for shelter dogs was also organized. Belinda Bel company’s van and two volunteers accepted donations from citizens. More than 100 kilos of dog food was gathered, and donated to “Oaza” shelter in Belgrade, by the plea of that society.

The event showed that there is support from city office and citizens for further enrichment of quality of man-dog cohabitation in Belgrade. Similar to their support for pet friendly cafes and restaurants, Belgraders showed readiness to support well-organized events in which dogs also take part. It is to be expected that in the Responsible Dog Owners Walk 2016. a greater number of owners and their dogs will take part.

Belgraders have shown many times that they eagerly help animals and donate food for them, especially during the last year’s floods, and therefore we expect that they will be ready to make this segment of Responsible Dog Owners Walk massive as well.