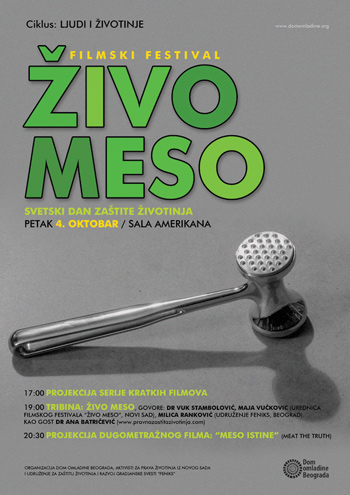 On October 4, 2013 at 7 pm, in Youth Center of Belgrade was held film screening and panel discussion titled “Live Flesh” (from the cycle: “People and Animal”). Responsible for the organization and implementation of the program are Youth Center of Belgrade, animal rights activists from Novi Sad and the Society for the Protection of Animals and the Development of Civic Consciousness “Phoenix” from Belgrade.

Presented films gives intersection of the situation in the cruel exploitation of animals. They were recorded with a hidden camera or as a part of a secret research and can not be seen in regular movie showtimes (cinema, TV program). Movies are documentary, educational, exceptionally viewed and rewarded, but also shocking. They show events in the meat industry, the pet trade, circuses, zoos, industry of leather and fur, in the experiments etc. Films also shows how much any of us can do for the other people, other species and the environment. Every decision that we make have a big affects to entire community.

We watched the following movies (total running time: 130 minutes):  “Their future is in your hands”, “Biosearch”, “Fun fur”, “Sad eyes and empty lives”, “Be a witness”, “Animal rights”, “Some die traveling”, and “Project dolphin”.